I may have had seitan stew and colcannon for breakfast. Who makes the food rules anyway. It always tastes

better the following day and the flavours go next level.

The colcannon I made here was a case of using up odds and ends so it was Chinese cabbage instead that I just finely grated and added a handful of chopped chives into the mix. Plenty of variations out there but this was a waste not want not mash. To the mash I also added almond milk, a little garlic, dijon mustard, salt/pep, vegan butter and a large scoop of veganaise vegan mayo. Thanks to my friend Ruth for this delicious mayo

idea. No calorie counting here. It’s all about getting the creaminess and maximum taste explosion. 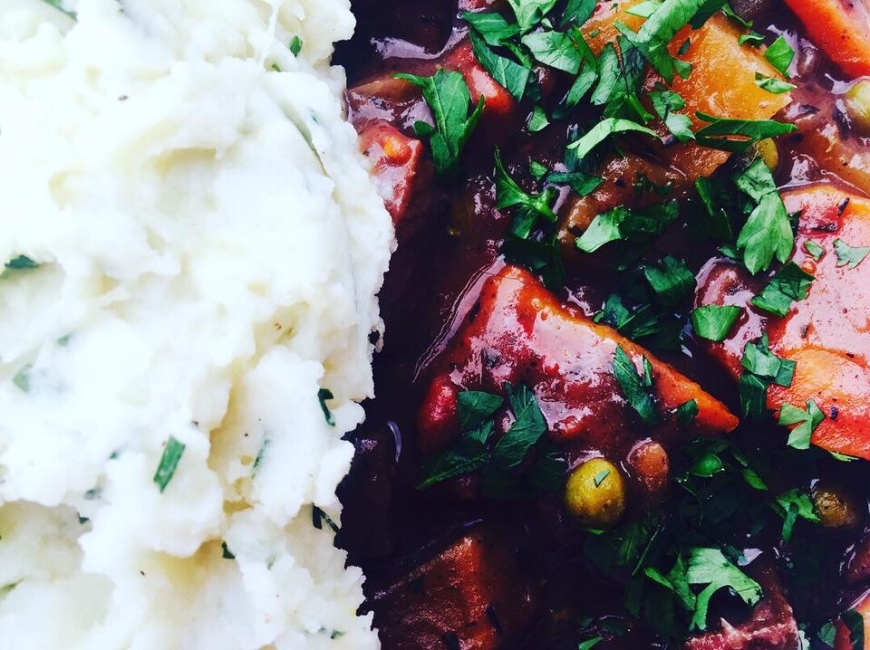 The seitan stew as with most of my recipes changes every time I make it but the general recipe is as follows. One packet of seitan chopped into chunks and sautéed in a pan with two red onions finely sliced, three cloves of minced garlic and a tin of tomatoes. In a separate pot pour approx 750ml of veg stock (or enough to cover veg) and add two chopped carrots and half a turnip (or root veg of choice turnip, celeriac etc) bring to the boil reduce to a simmer and let the veg cook through.

I hickened the stock with some buckwheat flour and then added in the seitan, onion and garlic mix along with ground cloves and cinnamon, chilli flakes, salt/pep, squeeze of ketchup and Hp brown sauce, drizzle of agave, dried thyme and basil. Adjust seasoning to your liking. A nice handful of garden peas are great here too for a little sweetness. Leave to simmer for a few hours or better still overnight. Voila! Bursting with flavour and so hearty and warming. Quantities above will feed five mouths a large plate. It’s a handy one to freeze too.

One thought on “Seitan stew and colcannon”